"The Handoff" is the second episode of Season 7, and the seventy-seventh episode overall. It aired on April 7, 2016.

"Don't be the same feckless idiots you were when this was a spy agency!"

Archer and Lana make a tricky handoff while the rest of the gang hears the best voicemail ever.

Picking up immediately where "The Figgis Agency" left off, Archer and the rest of the Figgis Agents realize that they've been had. Veronica Deane shows up at the office to report that she's being blackmailed after having been robbed of a computer disk with some "sensitive" information on it; the very same disk marked "Longwater" that the agents just stole and delivered to an enigmatic woman posing as Veronica Deane (a fact Cyril almost accidentally reveals). Deane promises $200,000 for the disk's return and the detectives eagerly take the case.

Archer and Lana head to Alan Shapiro's mansion, or rather "return" to it. While the guard dogs recognize them, Shapiro, fortunately, does not. The blackmailers have informed him to bring 2 million dollars in exchange for the disk. Lana poses as Shapiro's chauffeuse, Archer hides in the trunk, and the three of them drive out to meet a gang of bikers and carry out the handoff. All goes according to plan until one of the bikers opens the briefcase to find not 2 million dollars, but rather 2 stacks of Pam's flyers for the agency. Outmanned and overpowered, Lana, Shapiro, and a still unaware Archer, are taken by the bandits back to their hideout.

Meanwhile, back at the agency, old habits die hard as Cheryl, Pam, and Ray slip back into general malaise. Malory encourages Cyril to reinvent himself from the uptight, control freak he was in New York to someone better, and insists the others get to work and make contact with Archer and Lana, who are overdue with their report. Against their best judgment, they call Archer's phone.

Archer's ringtone sounds from inside the limousine trunk, alerting the bandits to his presence. What follows is a very drawn out and graphic-sounding fight between Archer and the bikers, which the agents mistake for the latest and most elaborate of Archer's voicemail pranks. Having dealt with all but two of the bandits, Archer finds Lana and Shapiro handcuffed to a pipe in the kitchen. Shapiro reveals several things: that he didn't bring the money because neither he nor Deane could afford it, that he knew the detectives used to be spies, and that he's in love with Veronica Deane. Archer lets slip that they were the ones that stole the disk in the first place (and poisoned the dogs).

All the commotion alerts the bikers. They plan to kill the three of them until Shapiro offers the $200,000 cashier's check that was meant for the detectives. They're about to take the money when Malory and the others, having realized the call wasn't a prank, burst in and save the day.

Back at the office, Cyril leads a post-mortem of the case. The event is a qualified success, but questions still remain: What is "Longwater", and who's trying to blackmail Veronica Deane? Mysteries aside, the Figgis Agency has made a cool $200,000 and Shapiro has promised to recommend the group to his Hollywood contacts. Things are looking up.

Archer: "Would you care for a drink?"
Lana: "Archer its barely 9 ..."
Veronica Deane: "Corpse Reviver #2, please but if you don't have real Absinthe I'll have double Sidecar, French"
Malory: "Oh, that sounds good, I'll have..."
Archer: "There's not enough."

Malory: "Which is an excellent segue into a brief overview of our fee structure."
Veronica Deane: "Two Hundred Thousand dollars."
Cyril: "Wow, that was brief."

Lana: "So I would love it if you would shut up so I can think of a way out of here."
Alan: "Uh, want to try yanking on the pipe?"
Archer: "Phrasing."

Archer: "Oh, and I also got stabbed."
(Cyril writes down "Archer Stabbed!" on the Pro section and underlines "Stabbed" twice)
Archer: "How is that a pro, you dick?"
Cyril: "Hmm, learning experience?"
Archer: "Well, joke's on you, I didn't learn anything."
Lana: "There's your fridge magnet." 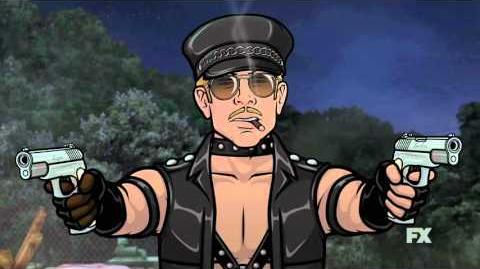 There are 22 screenshots and images from "The Handoff" on this Wiki, visit the category page for a complete gallery.

Retrieved from "https://archer.fandom.com/wiki/The_Handoff?oldid=50684"
Community content is available under CC-BY-SA unless otherwise noted.