1.30
"Sea Tunt: Part 1" is the twelfth episode of the fourth season of Archer and the first part of the season finale.[1]

The Isis crew heads deep into the Bermuda Triangle to save an underwater sea laboratory from its deranged leader, thanks to the help of Cheryl's dim-witted brother and his equally dim-witted fiancée, who drive Cheryl crazier than usual.

A bomber carrying a hydrogen bomb crashes off the coast of Bermuda. Meanwhile, Cheryl's brother, Cecil Tunt, tries to get Cheryl's half of the fortune. Cecil fabricated the story of the hydrogen bomb to (1) gain secretly recorded stories from the ISIS agents regarding Cheryl's mental instability and (2) gain ISIS' help stopping Captain Murphy.

There are 9 screenshots and images from "Sea Tunt: Part I" on this Wiki, visit the category page for a complete gallery.

Here is a sample of three images from the gallery:

Cecil learns Cheryl is a pyro

Pam is allergic to soy 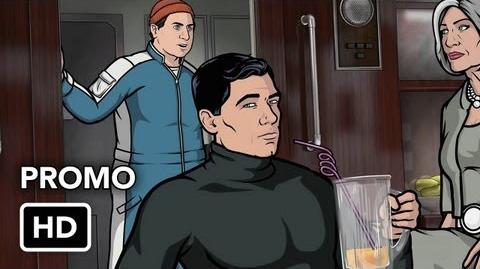