"Pocket Listing" is the ninth episode of season 6 and the seventy-first episode overall of Archer.

Slater has the gang swindle the Durhani royal family and Ray Gillette lends a hand.

At ISIS headquarters, Slater outlines the latest CIA mission for the agents: incapacitate the Durhani royal guards, sedate the royal family with a fast-acting tranquilizer gun, and allow Slater to scan their phones and electronics, so America can monitor their communications. The Royals are house-hunting for a New York residence, so the operation is conducted at Tunt Manor where the gang takes up their positions: Dr. Algernop Krieger monitors the cameras, Lana Kane and Pam Poovey pose as maids, Sterling Archer is the butler, Cyril Figgis is a valet, and Ray Gillette is in camouflage in the conservatory.

Because of her familiarity with the property and its history, Cheryl Tunt is able to convincingly offer rich, often grim, details to the innocent Crown Prince Fawad Fawaz and his overbearing mother Queen Yasmin. (Photo Ref) Despite this, flaws and infighting immediately come to the forefront. Lana finds Slater's plan both unethical and unnecessarily complicated, Archer pines for the beautiful queen, Slater starts repeatedly tranquilizing Krieger for his perceived annoyance, and Cyril hopes to drive a wedge between Archer and Lana by exposing Archer's philandering. In the formal dining room, Archer becomes convinced that he must have sex with the queen. Cyril's strategy to win Lana back by revealing Archer's plan backfires when she instead decides to make Archer jealous by seducing the prince.

Ray successfully dispatches with the guards by lacing them with a powerful chemical laxative, but Slater's contrived plan quickly goes off the rail: Lana entices the prince to the bedroom, a giant venus flytrap in the conservatory attacks Ray, Archer sedates the Prince and Slater, and he and Lana start making out. The Queen comes across the scene, screams for the guards, and gets tranqed by Archer. Everyone, except for Lana and Sterling who are making love in the bathroom, escapes out a secret passage before the guards arrive and the royals wake up. Apparently, the danger made it so much hotter.

The mission is a colossal failure; although Slater and the CIA weren't implicated, the Durhani ambassador is furious and Ray has lost his hand to the carnivorous plant. On the plus side, Lana and Archer are back together.

"Murder was common—tribes resisting enslavement were wiped out; administration officials expected to receive back a severed human hand for every bullet issued. Rape and sexual slavery were rampant. Workers failing to secure assigned quotas of rubber were routinely mutilated or tortured. Administration officials so completely dehumanized local peoples that at least one decorated his flower garden with a border of severed human heads."  That is a lot of hands.  ​​

Ray:  "Can someone explain to me why the CIA are spying on American allies?"
Cyril:  "Well Ray, there were these things called dinosaurs, and when they died they turned into oil, somehow, and that's what your car uses for food."
Archer:  "Thanks Al..."
Cyril:  "Al?"
Archer:  "Jazeera!"
Archer:  "Look, for all we know, Slater wants all that stuff to protect the royal family."
Cyril:  "From what?"
Archer:  "Cabals!"
Ray:  (snickers)
Cyril:  'What?"
Archer:  "Yes, sinister cabals, I bet the royal palace is lousy with them.  So instead of trying to undermine the mission - don't undermine it!"

[This whole scene is a satire on the CIA trying to protect anyone other than the US Administration, with Archer missing the 'core concept' of a cabal, which is by definition a group.]

Slater:  "Okay, Chinstrap, let me see what we've got on the other cameras"
Krieger:  "Bathroom 1, Bathroom 2, Bathroom 3, Bathroom 4, Bathroom 5, Bathroom..."
Slater:  "Are all the cameras in bathrooms?"
Krieger:  "Nooo, just my faves.  Bathroom 6, Bathroom 7, Bathr-uh" [shot with tranquillizer dart by Slater]
Slater: "Shoulda gotten some poisoned ones."

Cheryl:  "Bring us to the formal dining room which seats 80, with plenty of room for servants to skulk around...[sinister music starts up]...ladling turtle soup into sterling silver bowls, their sullen eyes downcast as Grandmama makes a joke about chopping off their hands if they spill even a single drop like we used to do in the Belgian Congo...hmm...[snaps out of wistful moment]...and how about that chandelier huh?!  But I wouldn't want to dust it!"

There are 11 screenshots and images from "Pocket Listing" on this Wiki, visit the category page for a complete gallery. 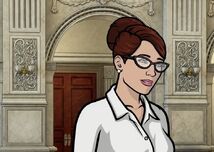 Cheryl reminisces on her Grandmama

Krieger watching cam in his undies

Security man and YYZ on screen

For the slide show 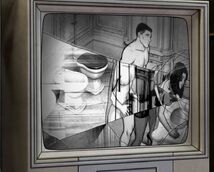 Ray of the Triffid

Handless Ray
Add a photo to this gallery

Retrieved from "https://archer.fandom.com/wiki/Pocket_Listing?oldid=47786"
Community content is available under CC-BY-SA unless otherwise noted.