Key is probably best known for staring in the Comedy Central sketch series Key & Peele between 2012 and 2015.

He has also spent six seasons as a cast member on MADtv and made several guest appearances on the improvisational comedy show Whose Line is it Anyway?. In 2014, he also starred in the first season of the FX series Fargo and the sixth and seventh season of the NBC series Parks and Recreation.

In 2017 Key also began providing the voice for his second character, Floyd, the Bass Player for the Dreamland House Band in Season 8. 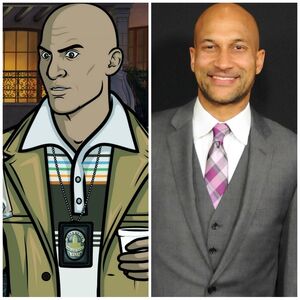 Retrieved from "https://archer.fandom.com/wiki/Keegan-Michael_Key?oldid=34642"
Community content is available under CC-BY-SA unless otherwise noted.