"Because I happen to be a kick-ass accountant!

"Did that sound better in your head?"

Cyril Figgis is one of the main characters and a former ISIS comptroller and field agent. In season five, he was briefly the President of San Marcos. Cyril is a rigid, unerring company man and Sterling Archer's easiest and usual target for ridicule and humiliation, usually without Cyril's knowledge.

Cyril's exact age is unknown, but judging by his dress style and the grey streaks in his hair, he is roughly in his mid 40s.

As a child, he lost his mother in a fire and seems to have been raised entirely by his father who was extremely strict and demanding. It has been stated numerous times that his father constantly pressured him and showed complete disappointment in his son no matter what Cyril did or how hard he tried to please him.

According to Cyril, the peak of his Father's disappointment was during the regional spelling bee in the episode "Tragical History", whereby Cyril urinates on his trousers as he is asked to spell the word "Onomatopoeia".

His childhood has given Cyril a deep-seated insecurity in his masculinity that has led to an extreme amount of emotional dysfunction throughout the series. Bookish, awkward and lacking self-confidence, he is jealous of Sterling's career, charisma and provocative lifestyle because deep down Archer is everything Cyril wishes he could be. Cyril was dating ISIS agent Lana Kane after she broke up with Archer acting as Lana's rebound boyfriend. They soon had a "falling out" after she walked in on him having sex with Framboise and subsequently discovered he was cheating on her as much as Archer ever did. Weirdly, Cyril cheated on Lana with several of the women Archer had sex with such as, Cheryl Tunt, Trinette McGoon, and Framboise, who Archer had sex with merely minutes earlier in the same exact building with Lana several floors above him! It has been implied that he is extremely well-endowed, with Cyril going so far as to attempt to get his medical plan to cover a "penis ensmallment" as discovered by Cheryl Tunt and Pam Poovey in "Training Day". His lack of confidence stems from his inability to please his father.

Cyril is the unwitting father of the wee baby Seamus. When Trinette McGoon slept with both Cyril and Archer, they both used a chocolate bar wrapper to imply they were using a condom (as Trinette assumed the candy bar wrapper was a condom wrapper). Cyril's parentage of Seamus was verified when his blood was switched with Archer's in "Blood Test", which tested positive in the paternity test.

As the series has progressed the distance between Cyril and his ultimate rival Archer has closed somewhat though there is still a vast expanse between the two. Cyril has become an agent of ISIS, gone on missions, fought other spies, used firearms (though laughably poorly), and traveled the world. He has slowly become trim and physically fit able to keep up with the other agents on their missions and even able to positively contribute to the team. At one time he was responsible for saving Archer's life when Archer was bitten by a snake and Ray was disabled lifting a jeep. He drove the car and acquired the medicine showing a genuine care for Archer rarely seen.

To a small degree, he has achieved the life he dreamed of when he first began working for ISIS. He is still demeaned and poked fun at by the other ISIS members even having Archer point out that in a way his entire life has been as farcical as his own. Through dint of sheer hard work, he has gained the respect of the others at ISIS and even Archer to a small degree as an agent having at times prevented the failure of missions and even saving all of their lives by flying the space shuttle. Over time his envy and hatred of Archer have faded a little since he has become an agent and has adventures on missions with Archer. His fear of Archer's temper has also faded as he has started standing up to Archers bullying him even punching archer in the face when Archer continued to shove him, though he was immediately beaten for that decision. He has at times even yelled at Archer for endangering Lana whom he still loves. When Archer threatens Lana's life with his idiocy or blindness to danger Cyril has stopped Archer and brought him back to reason. He has to a point become the man he wanted to be and has gained more confidence as an agent. He now views Archer similarly to the other members of ISIS as a fool and the awkward gawkiness has been replaced by the confidence of a real man.

The other agents of ISIS still view him as the lowest man on the totem pole, but still rush to his rescue when he is in danger even Archer has saved his life many times though he continually mocks him for it. His hatred and thirst to murder Archer is no longer as prominent though he still desperately wants Lana back and shames himself relentlessly with his half handed efforts at wooing her which embarrasses and lowers him in the eyes of his fellow employees who view his efforts as idiotic and disdainful which says a lot. In a way, he is a farcical copy of Archer and this is often mockingly showed in the series numerous times.

Cyril Figgis is a timid man that lacks in self-confidence. It has been shown an uncountable number of times where he is scared and unconfident. He also appears to be neurotic in some occasions as well as disconcerted by small things much of which is attributed to his childhood by not being able to make his father proud.

Conversely, Cyril is one of the only individuals in the group to show character development. Even though he is still picked on, we have seen his confidence increase tenfold and he is often not given credit where it is due. Despite his father thinking him a disappointment, Cyril actually turned out much better than he did. Cyril was an ISIS comptroller, he worked under the C.I.A. as a private contractor, practised law as a defense attorney, was briefly President of San Marcos, and now has his own private investigator firm, The Figgis Agency. In addition to this, Cyril is a very intelligent and educated man. He most likely has an Accounting and Mathematics / Finance (BSc) degree. He also took and passed the Bar examination [1]which made him eligible to gain a Criminal Law degree, possibly Criminal Law- LLB (Hons), and practice law as a defense attorney. Whereas, his father is only a superintendent with only about 830 students in the entire county, kindergarten through to grade 12.[2]

We have seen Cyril's intelligence at play a multitude of times. Whilst briefly the president of San Marcos, Cyril pushes the rebels back and he is seen planning a counter-attack in which the Colonel seems to be fascinated and in high regards of it[3]. In his first mission as a field agent in "El Contador", Cyril's cleverness, efficiency, and improvisation skills are shown to be better than that of Archer's and Lana's. Archer, despite claiming he is the best in the world at it, is not really good at improvisation and covert mannerisms, apart from a few lucky occasions. This goes double for Lana as well, they have both been caught multiple times due to overtness and unprofessionalism. [4][5][6][7]

Despite all of his more positive traits, he cheated on Lana several times during their relationship, yet ironically didn't trust Lana's faithfulness to him on multiple occasions, and also didn't apologize for his actions. Additionally, he imprisoned Archer while he was the President of San Marcos out of revenge and pettiness.

Cheryl Tunt was not the only woman he cheated on Lana with. Despite feeling guilty about this and being the smartest individual in ISIS, he is easily blackmailed by Cheryl to have sex with her again. [9]

While in the undisclosed rehabilitation centre, Cyril begins suffering from some delusional-related disorder as he is depicted in "Swiss Miss" talking to seemingly nobody by a vending machine and also hears a coyote.

At least ten sexual partners have been confirmed, including:

Seamus McGoon is implicitly depicted as being Cyril's child. In "Blood Test", Archer is accused of being the wee baby Seamus' father by the escort Trinette McGoon. To prove this, a DNA test was in order with ODIN providing security to ensure the integrity of the DNA test's results. Archer was drained a litre of his blood, which was kept inside a vault within First Saving Bank under ODIN guard pending the DNA test's date which was to be administered in front of both parties. During the eve of the DNA test, Archer had Cyril incapacitated and subsequently drained a litre of his blood. Archer then proceeded to break into First Savings Bank and replacing his blood with Cyril's. The DNA test indicated a positive match. It was later revealed Cyril had sex with Trinette as well indicating the child is actually his.

After the events at the end of season 7, seasons 8, 9 and 10 see Cyril take the form of a dream persona:

There are 166 images of Cyril Figgis on this Wiki, visit the Cyril Figgis gallery to view all the images and screenshots. Here is a sample of images from the gallery: 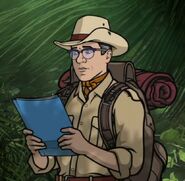 After being shot by Archer when aboard the Space Shuttle Intrepid.