"Crackers is the audacious scarlet macaw who is Archer’s other sidekick. Quick with important facts or a wise-ass remark, Crackers is sure to ruffle the feathers of those who meet him. He’s just a parrot, who can talk, don’t make a big deal out of it."[1]

Crackers is a speaking bird, specifically a Scarlet macaw, and macaws are members of the parrot family.

Crackers is a callback to the dishevelled scarlet macaw Archer encounters in Heart of Archness: Pt II. Crackers is more vocal, however, and his plumage is in better condition than his real world precursor. Neither bird is native to their location in the show: the natural habitat of the scarlet macaw is Central to South America, ranging from Mexico to Brazil.

Archer: Hey Crackers. Crackers! C'mere buddy. Okay, so listen...
Crackers: Yeah, not great huh?
Archer: No, no, not great. I'm gonna do the best I can but we're gonna hit the water pretty hard, probably even flip over.
Crackers:  Uhm-huh...
Archer:  There's a bunch of life jackets in the storage locker so I want you to get in there and hunker down, okay buddy? Hopefully that'll cushion the impact.
Crackers: Oh! You're talking to me?
Archer:  Who else would I be talking to...? Oh.
Crackers:  Yeeeaahhh.
Archer:  You can fly.
Crackers:  Yeeaaahh.
Archer:  Sooo, you're out of here?
Crackers:  Is that weird?
Archer:  I mean...
Crackers:  Yeah, obviously it's weird if you make it weird.

(Archer and Pam are trapped in quicksand.)
Crackers: Yeah, try not to thrash around. It makes you sink faster.
Pam: How would you know?
Crackers: Cowboy movies. 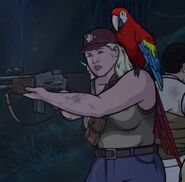 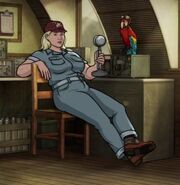