Archer Wiki
Register
Don't have an account?
Sign In
Advertisement
in: Characters Killed by Malory Archer, Characters, Males,
and 6 more

Satellites, computers, other technical support, The Lord of The Rings knowledge

Bilbo worked with the computers and satellites at ISIS, as well as other technical support. He was a Tolkien enthusiast and had an exact double working at ISIS (as seen in the first episode, "Mole Hunt"). His voice is provided by series creator Adam Reed in most of the episodes he appears in, although he was voiced by a different actor in the first one where he has lines, "Diversity Hire".

He lived with a roommate in Queens.

Bilbo is killed in the episode "Coyote Lovely", where Malory slaps him with enough intensity that it causes him to suffer a fatal heart attack. Krieger refers to his death in "Once Bitten" (an earlier episode, but one which was supposed to be aired after "Coyote Lovely"), where he tells Malory that he doesn't actually know how to operate any of the ISIS satellite technology and that "that was that fat guy you killed".

At the end of "Coyote Lovely", Dr. Krieger is seen rushing past Malory's door with a bin of hidden contents. When questioned, he runs off and the arm of the deceased Bilbo is seen falling out from under the cover. Due to Krieger's history of creating cyborgs, this is a hint that Bilbo may be converted into a cyborg at some point in the future.

There are 7 images of Bilbo on this Wiki, visit the Bilbo gallery to view all the images and screenshots. Here is a sample of two images from the gallery: 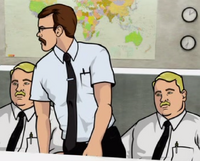 Bilbo having a heart attack
Community content is available under CC-BY-SA unless otherwise noted.
Advertisement