Archer's "car" of choice in Season 4 is a black 1970 Chevrolet El Camino muscle "car," seen throughout the season.

Previous seasons have featured different personal vehicles for Archer, some of which are listed below. 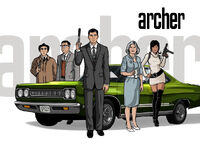 Either 440 cubic inch (Commando) or 426 HEMI engine are the only two factory options for the Plymouth GTX.


The car was seen only in promo pictures, never on the series.

Retrieved from "https://archer.fandom.com/wiki/Archer%27s_Car?oldid=45223"
Community content is available under CC-BY-SA unless otherwise noted.